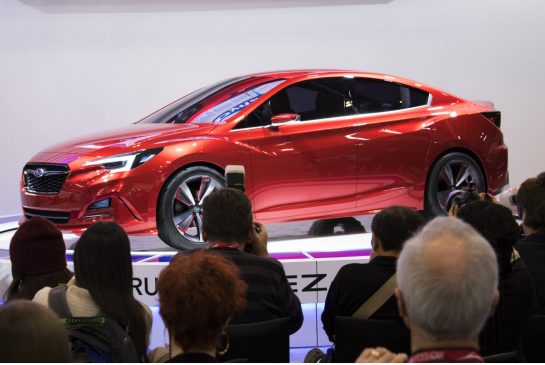 Over the weekend at the Canadian International Auto Show in Toronto , Subaru – for the first time in Canada – shared its Impreza sedan concept vehicle. While it is important to keep in mind that this is indeed a concept, it hints very aggressively at not only the styling of the next-generation Impreza sedan, but also the overall design of future Impreza models.

The new Impreza sedan concept takes many aspects from the previously released five-door hatchback concept, as well as a handful of new design elements new to the sedan concept.

While checking in slightly shorter than the current 2016 Impreza sedan, it is significantly wider and slightly lower, which goes right in line with what Subaru is calling a “Dynamic & Solid” styling profile.

There is no doubt it is an aggressive look for the Impreza, with its new hawk-eye headlights and more noticeable body contours. It will be very interesting to see how it translates to the final production of this next-generation model and if it retains as much flair as the concept tends to show.

It has not been officially announced what will be living under the hood of the next-generation Impreza sedan, but sources say it will likely continue to be a 2.0-litre version of Subaru’s famous flat four Boxer engine.

It is widely speculated that the final production version of the 2017 Impreza will be released this spring, so keep your eyes peeled to this blog and our Facebook page for more information regarding its release. However, it has been announced that the next-generation Impreza will be produced in Subaru’s Lafayette, Indiana facility.

In the meantime, come and take a 2016 Impreza for a spin for yourself. Fair warning though, you may just want to take it home with you!