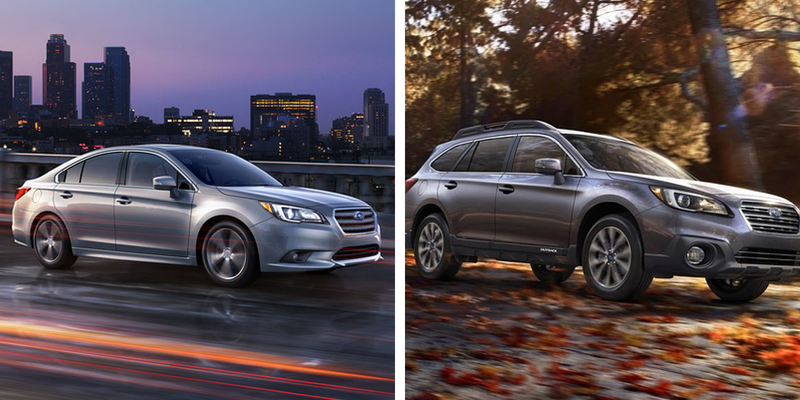 The great thing about Subaru cars and SUVs is the fact that we get to spread great news about them all the time. It seems like every time we release a new vehicle it is followed up with by a surge of information about new features, technology and achievements. We’ve spent the past few weeks showing off our excitement about the new Legacy and Outback, both of which were released earlier this summer, and now we get the chance to tell you more great news about them!

In keeping with the Subaru tradition of putting the safest possible vehicles on the road, the Insurance Institute for Highway Safety has awarded the 2015 Outback and Legacy TOP SAFETY PICK+ (TSP+) ratings, joining the same rank occupied by the 2014 versions, as well as the 2014 Forester. These honours add to Subaru’s record of the most 2014 TOP SAFETY PICKs (TSP), which was officially achieved with the BRZ earlier this summer, as well as our achievement in being the only manufacturer to earn TSP ratings for all models for five years running!

In order to qualify as a TSP, vehicles must earn acceptable or good ratings in small overlap protection (where 25% of the vehicle’s front end strikes another vehicle or rigid barrier like a tree or utility pole) as well as good ratings in moderate overlap, front, side, roof strength and head restraint tests. To earn a TSP+ rating, the car has to achieve those ratings as well as basic, advanced or superior ratings in front crash prevention.

Helping to propel the Legacy and Outback to their superior front end crash prevention ratings is the optional EyeSight technology, which completely stopped the vehicle in the Institute’s 12 and 25 mph front crash avoidance tests.

Even though the 2014 Legacy was also an IIHS TSP+ winner, we weren’t satisfied with just an “acceptable” rating in small overlap front prevention. So, we improved it with better structural performance and improved restraint and injury reduction measures, increasing the rating to “good.”

At Subaru of Niagara, we take the safety of you and your family serious. We’re proud to provide the safest vehicles on the road for 5 years running and can’t wait to see what Subaru does next! To check out the safety, smooth handling and awesome driving experience of any of our vehicles, stop by today!